Museum editions in cooperation with the Shvartsman Heritage ART FOUNDATION

finis artis offers in cooperation with the Shvartsman Heritage Art Foundation the worldwide first reprographic edition of drawings on paper from their stock. We propose four sheets from three different cycles, exposed to the western public for the first time in spring 2009 in the Ludwig-Forum in Aachen, Germany.

The edition is printed on Velin d’Arches and limited to 20 pieces, plus 5 off trade. Compared to the originals, the sheets are slightly enlarged. 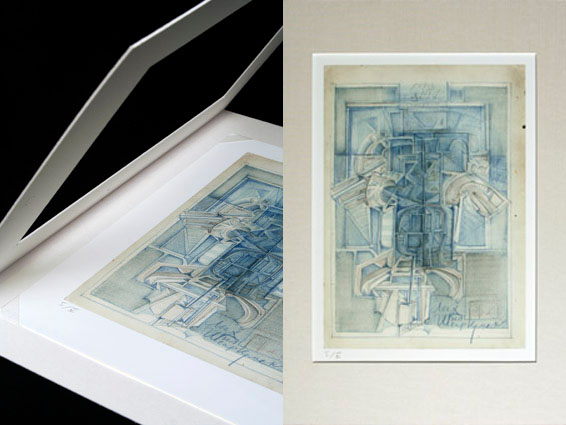 created in the 60s and 70s of the last century in Moscow an independent and unique work of paintings and drawings. Highly acknowledged in the art community, he did not belong to a certain school or movement. He claimed a significance of his work beyond esthetic considerations; he saw himself in the search to reveal complex but meaningful connections between signs, for which he introduced the term “Hieratures”. Insisting in the substantial existence of a superior reality, result of authentic religious thinking, he was on the other hand – as a modern man – sure to take part in the creation of a new era.

Though recognized as graphic artist and designer, being teacher at public institutions, his art could only develop outside of the officially approuved soviet union culture. Suspicious of misinterpretations and misuse in all kind of appropriation, his distance to official art kept him out of the reach of a broader public too, thus favouring the emergence of a legend around his person. With his first solo exhibition 1994 in the Tretiakov Gallery, being almost 70, overnight he became one of the most important Russian Artists in the 20th century. The first exhibition of Shvartsman’s work in western countries took place in 2009 in the Ludwig-Forum for International Art Aachen, Germany.